Try this activity which has two possible Task 1 essays (a process and a graph). 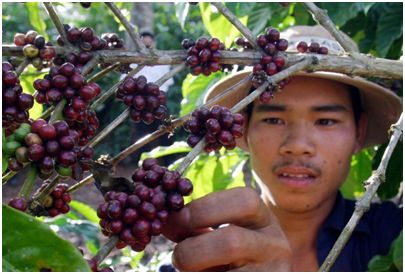 Visit the International Coffee Organization page at http://www.ico.org/prices/m1.htm (If the link is not working, there’s a PDF here.)

Look at the columns “Sep-10 to Aug-11” (third column) and “Sep-09 to Aug 10.” Export the main part of the table into Excel, delete all the other columns except the third and last ones, and sort to find the top ten or twelve exporters.

By answering the questions above, you should now know the main trends and the most important information in the graph.

Use synonyms and alternative vocabulary, e.g. for ‘exporter’ use ‘producer.’ Use different sentence structures, e.g. instead of starting every sentence with a country, start with a date or start with the word ‘exports.’

Vietnam was the second largest producer. It exported over 17 million bags in 2011, up from 14 million in the previous year.

Output in the Ivory Coast (Cote d’Ivoire) fell by half, from 2 million to just 1 million bags. This made it the only major producer with a drop in exports.

Make sure your 150 words has the main idea. You should generally be able to identify TWO trends or main ideas in a graph in IELTS.

Overall, Brazil and Vietnam are by far the biggest exporters, but almost all the top twelve producers countries increased output in 2011. 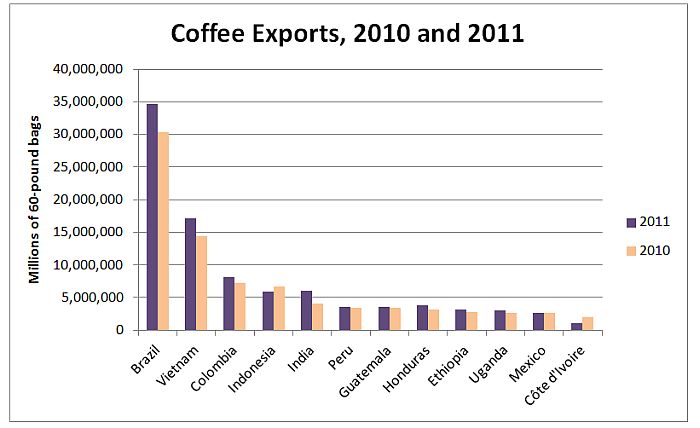 Here’s a PDF with a suggested answer and graph.

The Production Trail of Coffee from Tim Whalen on Vimeo.

The video uses a mix of active and passive sentences. Don’t write everything – put it in your own words. You should easily be able to write a 150-word description of how coffee is processed.

If you need more information, read this HowStuffWorks page, or this one from www.hawaiianmoonbeanscoffee.com.

Here is an example

Children: Cooperate or Compete? Some people think that a sense of competition in children should be encouraged. Others believe that children who are taught to co-operate rather than compete become more useful adults. Discuss both these views and give your own opinion.
Continue reading --->