Now many people think that we are spending too much money and time on protecting wild animals. The money should be better spent on human population. Do you agree or disagree?

In contemporary century, the endangerment and extinction of some species of wild animals have aroused citizens with sense of social responsibility. Some people hold strong support for the preservation of these animals, while others just think too much time and money have been consumed in this field. As for me, I am in favor of the former.

It should be made clear that funds for protecting wild animals can never be too much, since those animals can make money themselves. Since most of the endangered species are arranged in protected natural habitats, reserves and zoos, they can help to attract more tourists if they have chances to survive. Of course, certain amount of money is needed to be invested in this field, such as setting up reserves, hiring professionals, purchasing animal food as well as producing advertisement to raise public awareness of animal preservation.

On a further level, protecting precious wild animals , like giant pandas, rhinos and whales, contributes quite a lot to biodiversity. Scientists have testified that extinct species appear to disappear forever, even though technology tend to be rather advanced now.  Unfortunately, the extinction of some species may bring about biological imbalance and other unknown problems. Thus, animal preservation deserves proper amount of time and money of our society.

Admittedly, human community is confronted with a host of pressing problems in other fields, including climate change, lack of healthcare, poor standards of living, in some regions worldwide. The governments and societies definitely should attach importance to these issues, as well as animal protection.

To conclude, it is advisable to allocate money and time to make sure that wild animals can prosper and live harmoniously with mankind.

hi xiaoyu, this is my essay on this topic. pls comment it. i feel ur essay show me some new points, it is good.

but if you can add more supportive evidences or discussions, it will be better

below is link to my essay with this topic.

Hi Xiaoyu and thanks for this essay!

I think you've worked hard on this essay. Here are a few points.

Your organization is unusual and is a llittle bit of hard work for the reader. I think this is your layout:

Only your third paragraph really answers the question. In the rest of the essay, you have facts side-by-side, but you haven’t joined them together or synthesized them and evaluated them.

You’ve put a lot of effort into vocabulary, but your organization and ideas need more work.

The writing is NOT a vocabulary test -  the main test of vocab in IELTS is in the Reading and Speaking tests: Reading checks your comprehension and Speaking your natural production.

In the writing, it’s time to see if you can use simple word properly, rather than try to cook a dish with the most complicated ingredients.

Simplify. Use the simplest vocabulary possible.

Xiaoyu -  what does this mean? “Extinct” means disappear forever.  What do you mean by “scientists have testified”? ‘Testify’ means to give evidence in a court or to give an oath. Why not say “say” or “claim” or “report” or “warn”?

What does “tend to be” mean? What does “rather advanced” mean?

You need to leave out these phrases and give your ideas. Don’t use them because it says to use them in some book. Dump them and write real sentences with your own real ideas.

Don’t use this phrase. You could use it in a million essays, and it would still be wrong in all of them. What are you in favour of, exactly? It’s an opinion essay, and we don’t know. 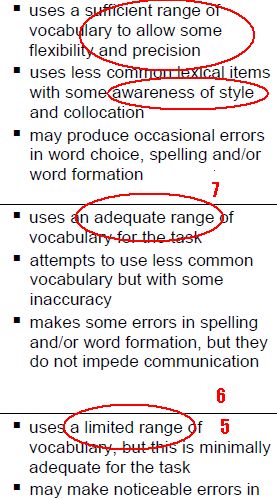 There is no requirement in IELTS for complicated vocabulary.  Here are the Lexical Resource bands for Levels 5, 6, and 7. In Band 5, your vocabulary can be “limited.” If you want a Band 6, your vocab only has to be “adequate.”

Now in Band 7, 8, and 9 it’s different. They introduce the idea of ‘precision’ and ‘style.’ Yes, the examiners are  happy to see less common or uncommon words, but the words MUST be used right, with flexibility and precision and style and in the correct situation. For Band 9, the criteria don't even say uncommon  -  they say "a wide range of vocabulary." So you can use easy words in Band 9 without fear.

The advice I can give you regarding vocabulary is to use the simplest vocabulary items you know. This will almost certainly mean that you will use them right – in the right style, and with the right prepositions, and in the right situation. This will guarantee you a Band 6 for vocab, and maybe even a Band 7.

Use complicated words but in the wrong way, and you will be stuck at Band Six. Really. Don’t go learning off reams of new words to use in IELTS writing. Go and learn new words so that you will recognize them in IELTS reading. But don’t use them in the writing until you have used them a hundred times. The writing exam is not the time to test out new or uncertain vocab.

Xiaoyu -  what does this sentence mean? Are the animals that live in zoos in danger? Should we protect the animals in zoos? I’m not sure what you mean.

Again I think you have worked hard on this essay, but I'd like to suggest that you spend less time worrying about vocabulary and more on concrete ideas and examples.