Hey, Enda, this is my IELTS part 1 job. I found that I am quite confused with the structure of my work. I realized my work is awful. So please help me.  I want to know how to fix my essay and improve it. Thanks

The charts below give information about travel and from the UK, and about the most popular countries for UK residents to visit.  Summarise the information by selecting and reporting the main features, and makes comparisons where relevant. 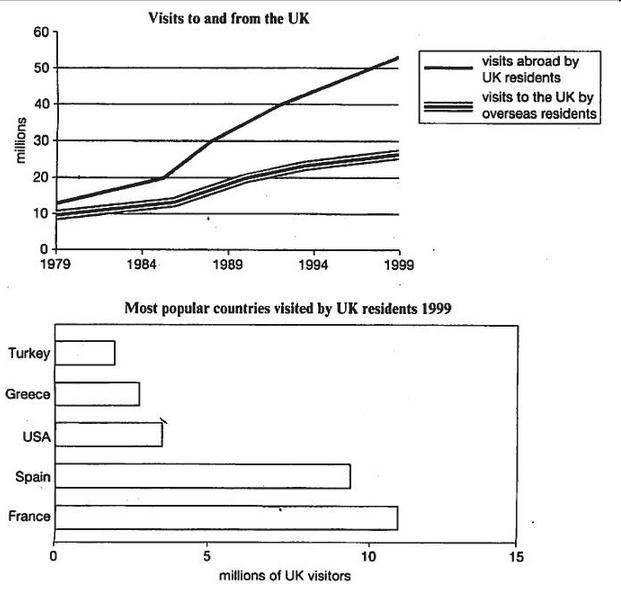 The line graph portrays the number of visitors to and from the UK, while the bar chart illustrates the most popular countries by UK residents 1999.

According to the line graph, the disparity between these two groups was keep expanding over the 20 years span. Specifically, only around 12 million visitors had been chosen visiting abroad by 1979. The number was rising marginally to 20 million until 1986. Then, the visitor’s number jumped to approximately 53 million at the end of 1999. While the increasing speed of visitors travel to the UK was much slower during the 2 decades, from 20 million to 27 million.

As shown in the bar chart, there were five countries relatively popular to UK residents in 1999. France was the most attractive country where attracted 11 million UK visitors. At the meantime, Spain had been chosen by 9 million UK residents. The figure of other three nations- USA, Greece and Turkey were close, served 4 million, 3.5 million and 3 million tourists respectively around this year.

Overall, even though the number of visitors from abroad expanded almost 3 times over the two decades span, the gap between enter and leave the country was enlarged gradually. One third UK visitors chose France and Spain as their destinations.

We could argue over this, but for me the main feature of the graph is not the difference between the two figures. I think the most outstanding feature is that the number of trips by UK residents shot up from about 12 million a year in 1979 to more than 50 million in 1999.

The second biggest feature is that the number of people visiting the UK also increased sharply, from 10 million, to almost 30 million, a threefold increase.

Comparing the two would come a little later.  Here's my suggested rewrite:

Your work is not awful at all!

Just watch the tense, put the overall sentence near the start, and try to decide on the main features.

Thanks Enda, I will try to correct my gramma mistakes. Just use the simple style of gramma which could control mistakes efficiently.

I have another question, if I write my conclusion at first, what I goona do in the last paragraph?

First graph, rewrite the topic indrodution and write a conclusion. Portray/discribe the characteristics of the graph/table in the middle part. Finally, ?

Thanks again, have a nice day.==

DavidLee asked what to put in the last paragraph in Task 1.

Well, you are not required to have a last or conclusion paragraph. It's not like Task 2

However, I recommend that you have a conclusion.

Here's the thing: in IELTS you will usually get a graph (or map, or diagram, or table, or process, or cycle) which has enough content/figures/data/patterns/trends for you to have TWO trends.

In other words, there will probably be TWO trends in any Task 1 -  not just one. My suggestion is to put the big one, the main one, the one that jumps out at the reader, in the second sentence ("Overall,,...") and to put the second one/both of them in the conclusion. No numbers or percentages, but perhaps a word like the 'majority' or 'a large proportion' or 'over half.'

Don't add new information in your last paragraph. If it's an important trend or piece of information, you need to deal with it in the body.

If necessary, or if you can't think of a secondary trend, just rephrase the main trend -  repeat what you said in the second sentence.