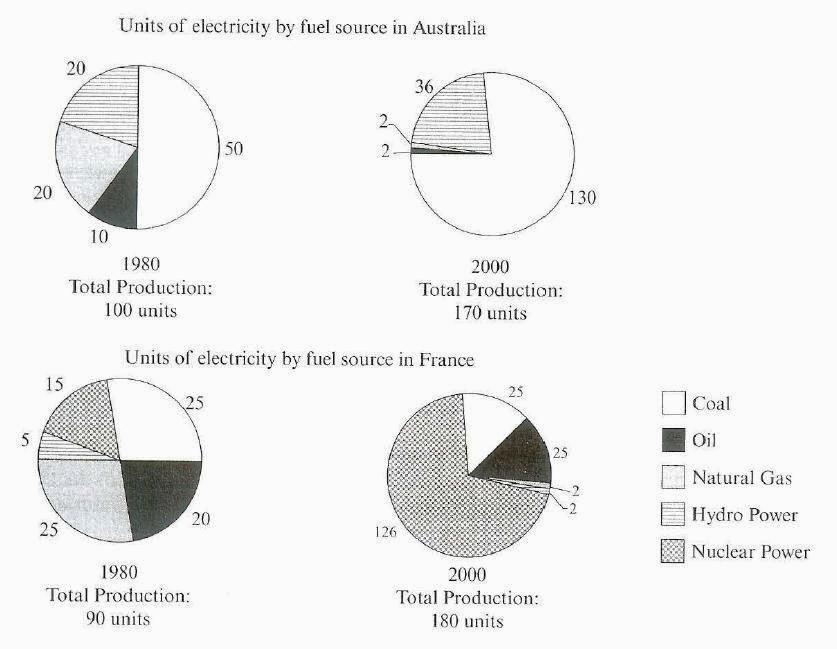 Thanks for all the comments.  I want to get some comments before i take the forthcoming (8.11) IELTS

I wote this essay with a counting watch, and i did not change anything in my essay, so i guess this one may reflect my writing level.

I do not know how to post the image, the pie charts.

The pie charts below show units of electricity production by fuel source in Australia and France in 1980 and 2000.

The pie charts give information about units of power production by fuel source in two countries (Australia and France) in 1980 and 2000.

It can be seen from the first pie chart that the total production in Australia (1980) was 100 units. Half of the fuel source was coal, followed by hydro power (20 units), natural gas (20 units), and there were only 10 units oil. While the total production stand at 170 units by 2000, it was a 70% increase. In this year 130 units coal were used to produce electricity, only 2 units oil were used. The remaining proportion was hydro power.

By contrast during this two-decade period, the total production in France doubled, from 90 units in 1980 to 180 units in 2000. In 1980 the most fuel sources used were coal (25 units) and natural gas (25 units). Only 15 units nuclear power contributed to electricity production. It changed a lot in 2000, more than 2/3 (126/180) production was produced by nuclear power. While only 2 units natural gas helped.

Overall, more coal was used in Australia during this period, from 1980 to 2000, while France took advantage of nuclear power.

It's easy to upload images, and we really need them in order to understand the question. It's impossible to do without the image.

One thing to do in the exam is to highlight the paper. Write, draw, underline, circle, add arrows.

Find the trend and put it first. Don't leave the reader waiting. Put the news first, just as you would see it in a newspaper. So describe the graph, and then make your second sentence an overall sentence.

This is important. Please do this, Victor, no matter what any other teacher or paper recommends. Put the overall sentence second. It will help you and help your reader.

Here the main differences are the importance of coal for Australia and nuclear energy in France. So your overall sentence is something much stronger than the one you have here ("used," "took advantage").

If you put this in your intro, the reader will now reasonably expect you to talk about France first, and then Australia (perhaps in separate paragraphs, although this is not needed unless you want Band 8).

So now repeat, but on't use the same words -  it's an English test and you only have 150 words to write, so show what you have got. The next sentence will be about France:

In 1980 nuclear power accounted for over 15% of French electricity needs. This was a smaller proportion than coal, at 25 units, and natural gas, which made up more than 25%. However, by 2000, the percentage of electricity from nuclear power had jumped to almost three-quarters, with fossil fuels such as coal and oil contributing just over a quarter, and just 2% from other sources. The biggest drop was for natural gas, which declined in importance from almost 30% in 1980 to a negligible 1% in 2000.

Australia has a similar reliance on one power source. In 1980, exactly half of Australian energy needs were generated by coal.  A further 20% came from hydroelectric power. The amount of electricity from these sources shot up over the next 20 years, and together they generated almost 75% of Australian electricity in 2000. In contrast, the 30% from oil and natural gas in 1980 shrunk to only about 4% in 2000 in Australia.

The amount of electricity generated also increased sharply in both countries. French electricty output doubled, from 90 units in 1980 to 180 units in 2000. Australian electricity production went up by 70% in the same period.

Both countries underwent major changes in power generation capacity, as Australia came to rely increasingly on coal and hydroelectricity and France on nuclear power.